Now you are asking; I've got to find it first ! I'll go and start that task right away.

M&T also increased the length of the standard operating arm (at the motor) by about 3/4" to make it lighter.

Here are the old photos that I have found. 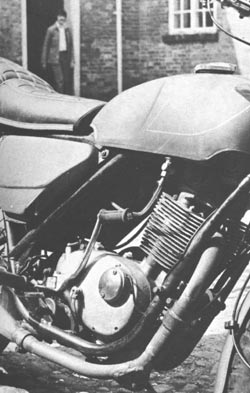 Look at the clutch arm. No change just the old type. 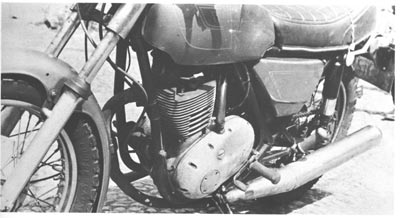 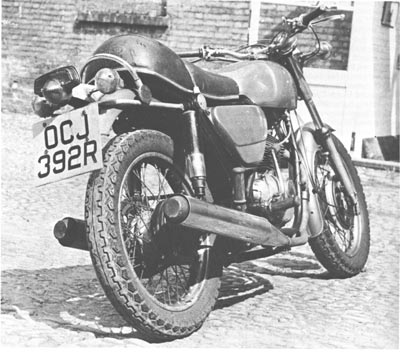 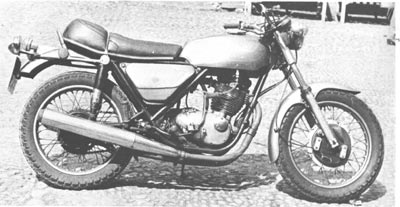 I Sweden it´s easy to find the owner by the registration No. I don´t know how it is in UK.

Its is easy in the UK too, all you have to do is join the Police Force

The First Classic BSA Scene.Gold Star,Rocket,C15,B50,A7 is a publication on ebay with mention of P92

Thats where I took the P92 pics from.

I think there are a B50 Mxer with sidecar in it.

Reg check in UK is available here, just right for you local tea-leaf

I first saw a photo of the Alan Sargeant bike, B & W, the one in the Road Ploughs link, in a Motorcycle Illustrated magazine in circa 1975/76. I subscribed to the mag for a few years because it was the only british mag of the time that didnt slag british bikes. Frank Melling was the editor and Alan Clewes their Dirt writer. As Alan owned an ex works B50 and raced at club level I think, he was very objective of B50s the Banks BSA Cheney replica machines and CCMs. He used to test CCMs for publication in the American magazines.
I have the article somewhere, the phot was nearly, or was a full page, and it talked about the bike as essentially a parts bin special but the 500 pound(?) price was too high for it to go into production. The front brake they said was from the fury/bandit (notice it has no airscoop).They also stated it was a smooth runner with the isolastics, could give high mpg, had an mx cam fitted and could do 90mph. Havent seen the article for a long time. That mag also used to regularly feature short pieces on the M & T B50 Endurance Racer efforts and also their Laverda project that followed.
BSA ALL THE WAY, Ride the Winner, and never,never give in to old age and tired bones
Top

I long time ago now, December 2004, I posted to say that I had purchased the first P92 prototye from Alan Sargent. Unfortunately redundancy, contract work and general procrastination on my part saw the bike pushed to the back of the garage and covered up. It really was a case of out of sight and out of mind! However, with the Covid pandemic and time at home I have managed to dust things off and virtually finish the restoration. Just a few cosmetic things to finish.

This is the OIF version made in Wolverhampton. I said it was the first P92 prototype because, as far as I understood from Alan Sargent, it was finished in anbout six weeks from the original brief. The second prototype, made by Doug Hele in the Triumph works was finished some months later (this is the bike in Sammy Millar's Museum). The third prototype was made after the original two were tested at MIRA (that is the one at the National Motorcycle Museum).

The bike I have has been restored and is almost as it was when made. I have changed the isolastics from shimmed to adjustable - Alan said he would have done this anyway but he understood the original brief was to produce a prototype quickly, so he used shims. Apart from these items and general BSA replacement parts, things are pretty much original.

Makes interesting viewing. Essentially oif chassis converted to isolastic with a disc front end, although there must be a lot of other detail changes.

They lost the under tank electrics box. I can see the coil still under the tank. Where'd they put the rest of the electrics?

A bit more on the red P92 posting.... This is what Alan Sargent told me. The brief, as most people know, was to make an isolatic B50 with available parts so as to keep cost down. In this respect, I guess it can be regarded as a parts bit special!

The bike started life as a 1971 B50SS that was used as works transport. I believe it was converted to its present form some time in late '72 or '73. Alan did not like the Norton top isolastic arrangement and so made a proper isolastic mount for the top of the engine. The swinging arm pivot and the rear isolastic mount have been combined onto a single 5/8" shaft, which carries a modified AJS swinging arm. The front isolastic is mounted to the frame so as to keep the standard engine lug on the front. However, I was told that the earlier B50 engines had a thinner front mounting on the drive side! To keep the width of the front jug down the LHS crankcase was changed to an earlier version - which incidently is stamped "Triumph"! The isolastics were based on the early Commando shimmed types, although I have now made adjustable types.

The wheels are standard conical hub types, with the front end from a Triumph including disc brake. The fork springs have been shortened to set the ride height a bit lower. The controls, clocks and brake master cyclinder are Norton Commando types. Alan said he originally added the small petrol tank, but was told that no road bike should have such a small tank and that he should put the 3-gallon tank back on the bike!

The electric box was removed and the lugs ground off. Alan did not like this arrangement. He considered it a nightmare for maintenance and a major source of electric problems. The rectifier and zener was moved under the seat, cooled by induction air. I have added a solid-state regulator at the front under the seat. The coil and Boyer box (which was fitted when I got the bike) are at the front similar to a Commando.

The exhaust was based on a Commando silence with a locally bent up front pipe. Over the years this had rusted away and Alan had a company in Dorset fabricate a similar one from stainless steel. It tucks away under the centre of the bike, so there is no chance of fitting a centre stand.

I guess the basic B50 must have been a good design as Alan took the bike when he left NVT and rode the bike, on and off, until his early eighties. He admitted that he did the minimum amount of maintenance for many years to keep the bike going. Apart from the general refurbishment it has had a cam replaced, been rebored to +40 and a few other bits and pieces consistent with basic wear and tear.

Obviously the most interesting parts are the chages to the frame so I have included a few pictures of the frame and mounts before the engine went back in.

Hi Bob, thanks for the additional info and pics.

You mentioned the bike was used as works transport, is it one of the 'XO' series of registrations that were kept for use by BSA?
Steve Sewell
Top

The bike is registered XON906J, but shows Alan Sargent as the first registered keeper, 21-04-1971.
Alan wrote some notes/memories about the bike, which he sent me. I think the following relates to the OIF version.

"Al Cave, the production chief, did not like the B50 and continually said as much to Lionel Jofeh, the MD. This led to an extended test involving 16 early production bikes being flogged around a road circuit (I think) for a fortnight, and then to MIRA for 100mph laps. The riders, recruited from production, development and anyone else who could or would, were promised bacon butties on their refuelling stops at Small Heath. On the first day there were no bacon butties! On the second day you couldn't move for bacon butties - we had a job getting rid of the surplus. On the whole the bikes performed well enough for production to proceed.
The specific B50 which we converted was obtained from Kitts Green where an employee was using it for commuting. We had to swap it for a Triumph twin which for some reason was at Nortons. I had wondered idly if it was one of the test bikes. I don't know the mileage as a new speedo was fitted on conversion."

It makes me wonder now if the bike was actually made/modified before the date I thought (72/73)! I did phone and ask Louise Sargent - Alan's widow - but she could not remember. I wonder if anyone really knows when the meeting took place that put forward the idea of an isolastic B50?
I was not aware there were special registrations - perhaps you can enlighten me?
Top