Here you can publish Your projects bikes.
Only BSA singles

So I had this B44 motor that came with a bunch of parts including 2 frames, this motor plus enough to make another one (almost), a B44SS gas tank and oil tank (fiberglass), several wheels, and a barrel of miscellaneous junk (literally a barrel of parts). I had sold B44SS frame and matching cases, front end and tanks, but ended up with this motor which was supposed to have been rebuilt, apparently in the last century: 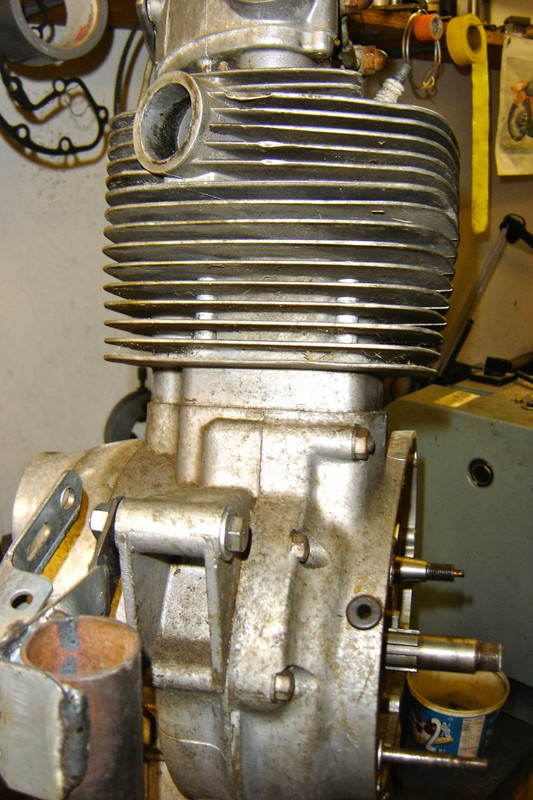 I decided to rebuild it again, including the crankshaft which I disassembled and sent to Ed Valiket who hones the rod and supplies oversize rollers. 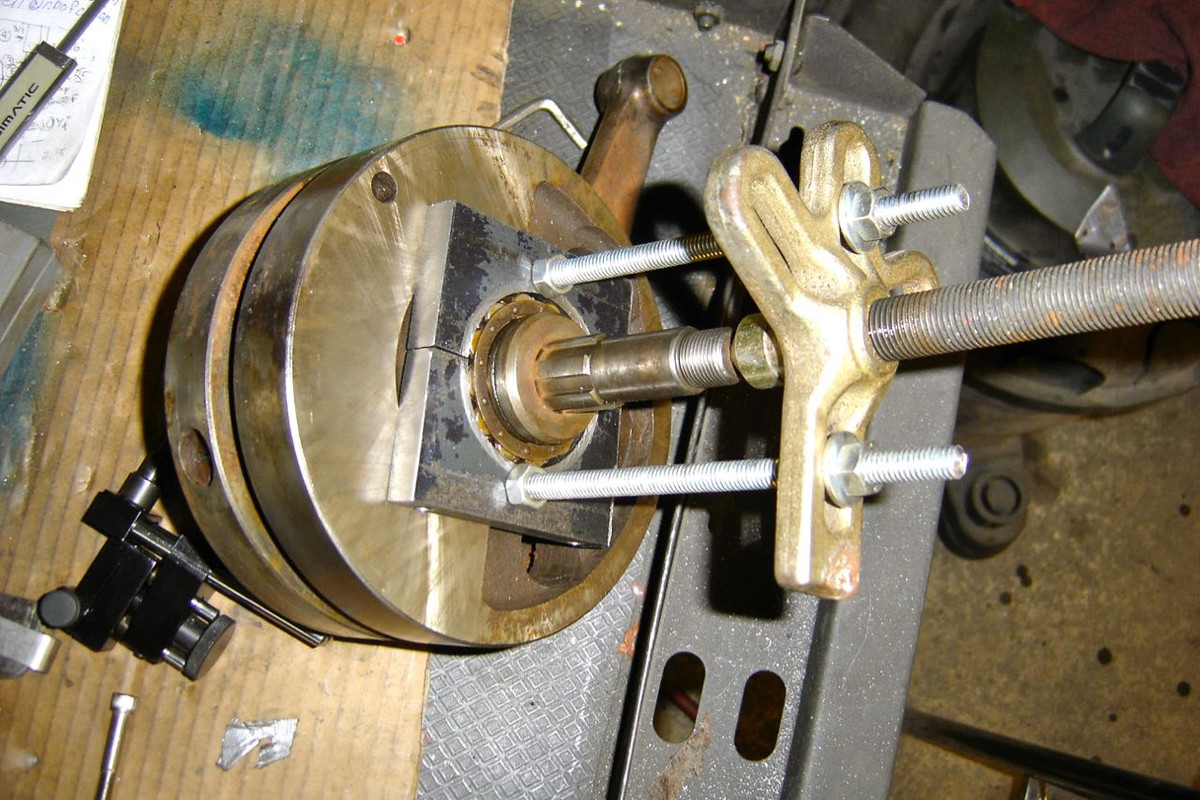 When it comes back and with a bit of polishing, it looks like this: 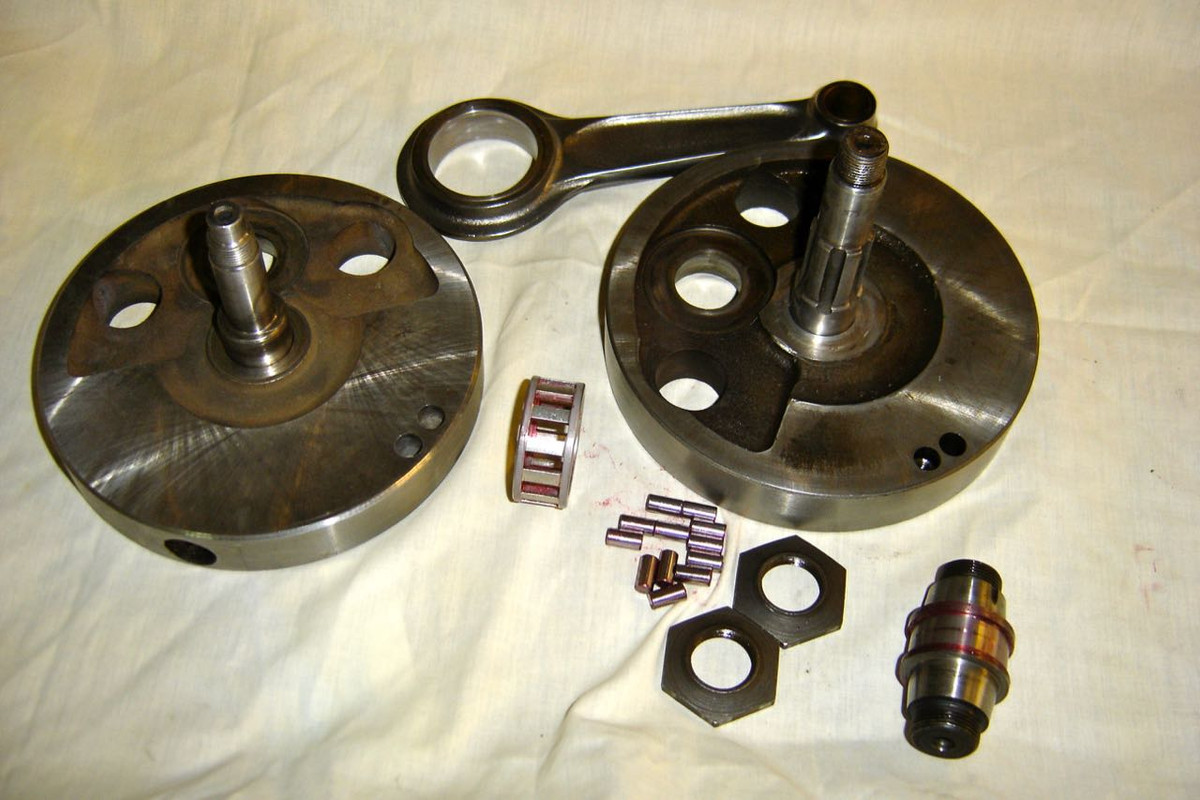 And with some new main bearings and transmission bearings, etc. it finally looks OK: 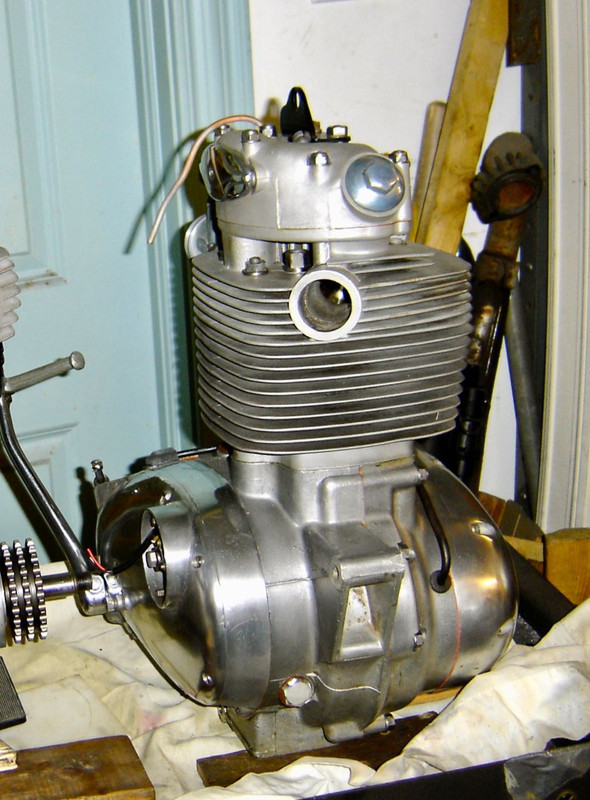 The barrel of parts and one of the hubs combined to make a nice QD wheel when spoked up to a Borrani rim I had purchased years ago on ebay, because no one wanted it with holes in the shoulders for motocross work. I did not know what it would fit, but it spoked up perfectly with some old spokes I had. SS spoke would have been nice, but this was to be a parts-off-the-shelf bike. Someone wanted to know what it weighed, I took this photo on the bathroom scales: 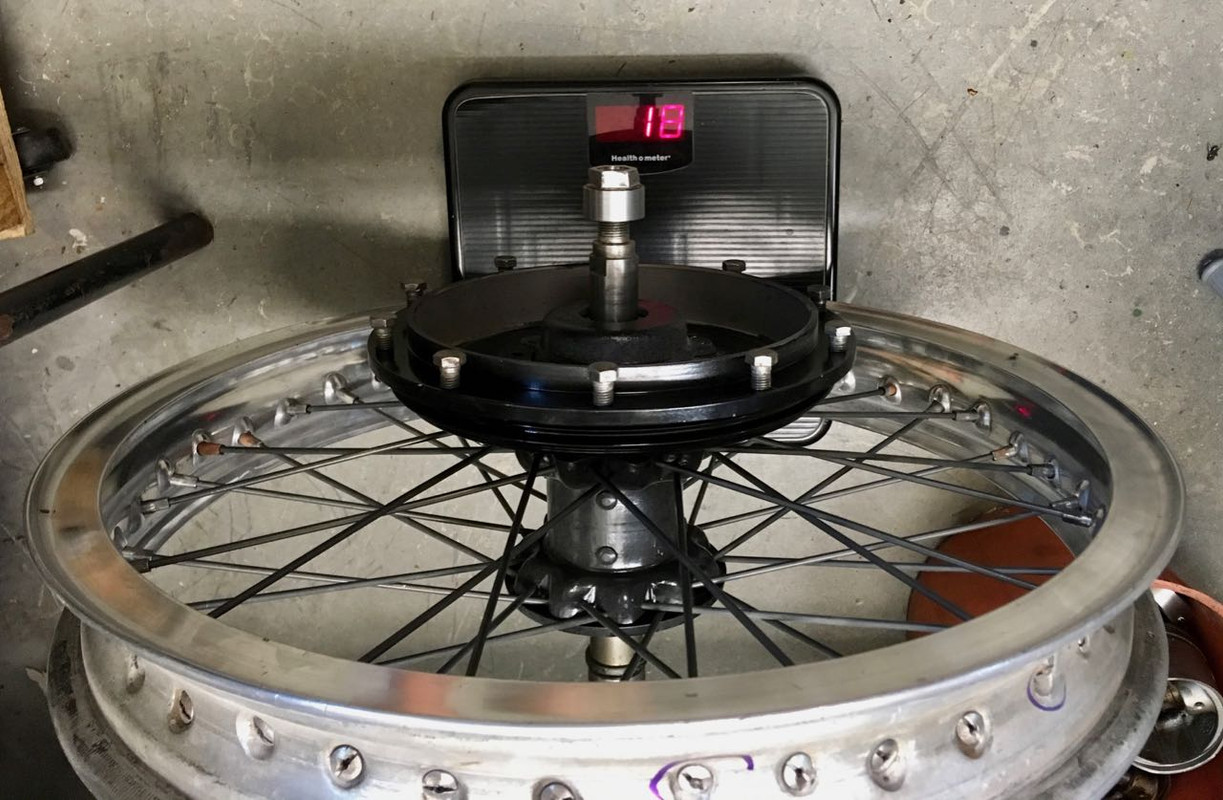 The frame is a 1970 B25 but it was brown with rust. A couple of hours of sandblasting and some 2-part frame paint fixed it up pretty nicely. 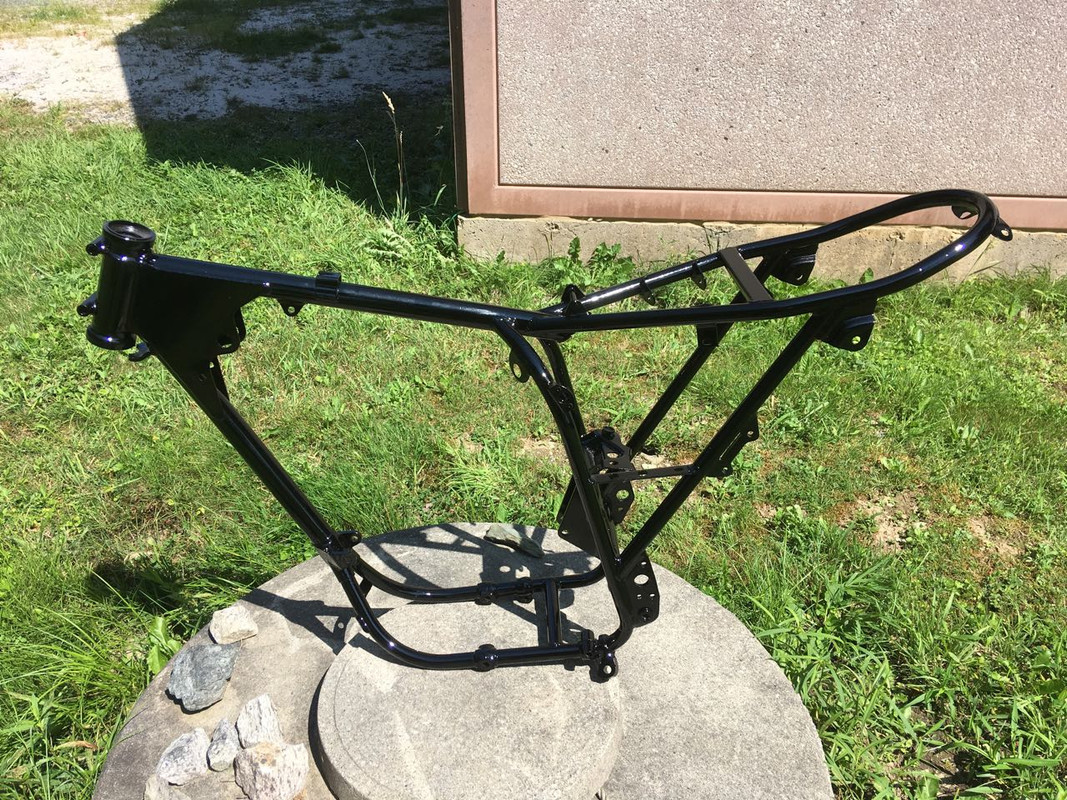 Fitting the wheel to the frame with a couple of old Girlings, I think from a Norton Commando, was a good start: 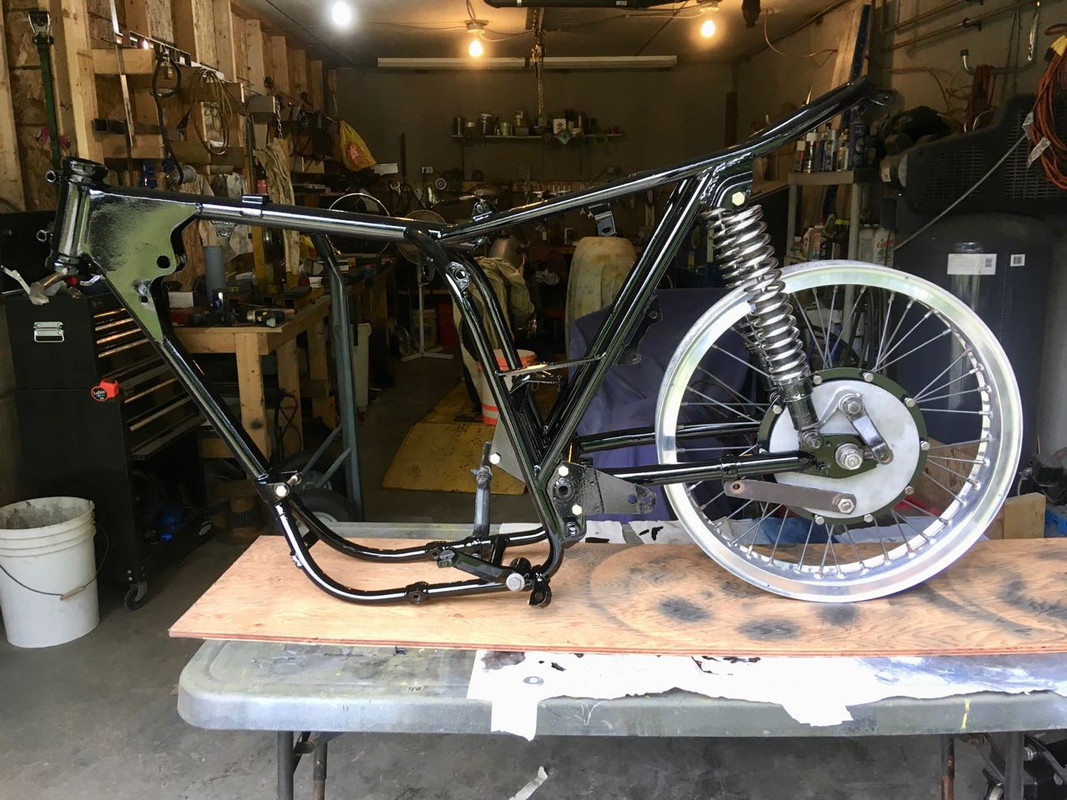 I had a nice set of OIF forks from a T or MX B50 or B25, the type with the matt as cast finish that were fitted to the B25 frame by making bushings to use the OIF tapered roller bearings: 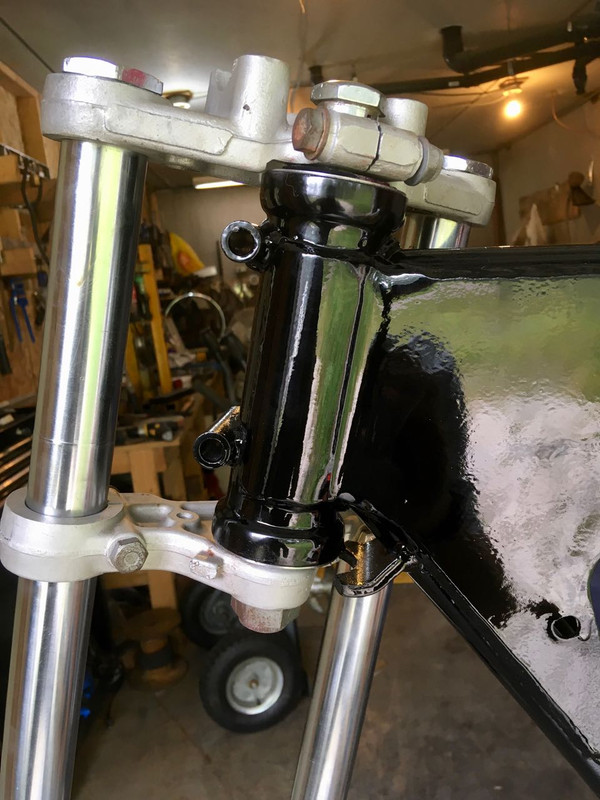 A close up of the top bushing/bearing shows I did not make the cups quite deep enough to completely enclose the seals. But after a half day of machining, I decided to let it ride for now until I have another suitable piece of material, aluminum next time, to redo them. 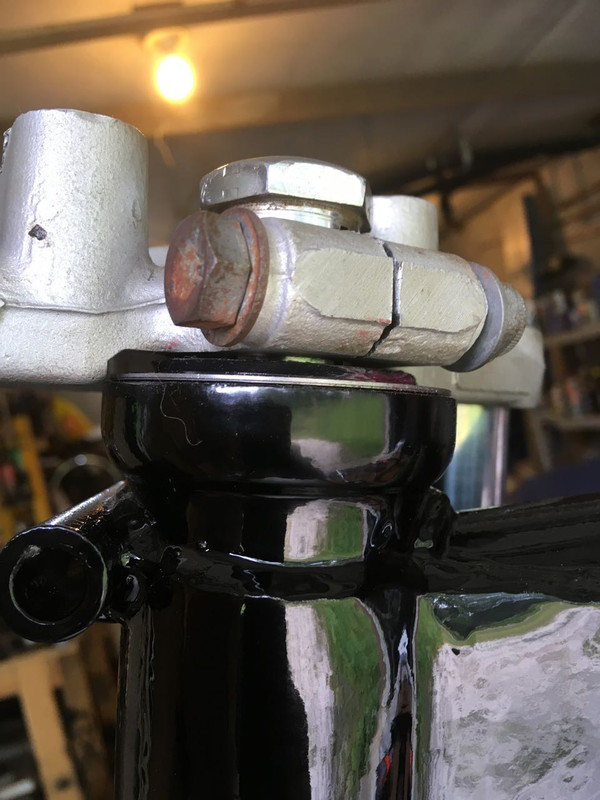 I also had an 8" full width hub, axle, and a SLS brake plate with the "keyway" type brake stay. I machined the head of a 3/8" bolt to fit the keyway and with a couple of washers, it looks like it will work fine for the kind of work this bike will be doing (jigging around the countryside and maybe the cow pastures.) 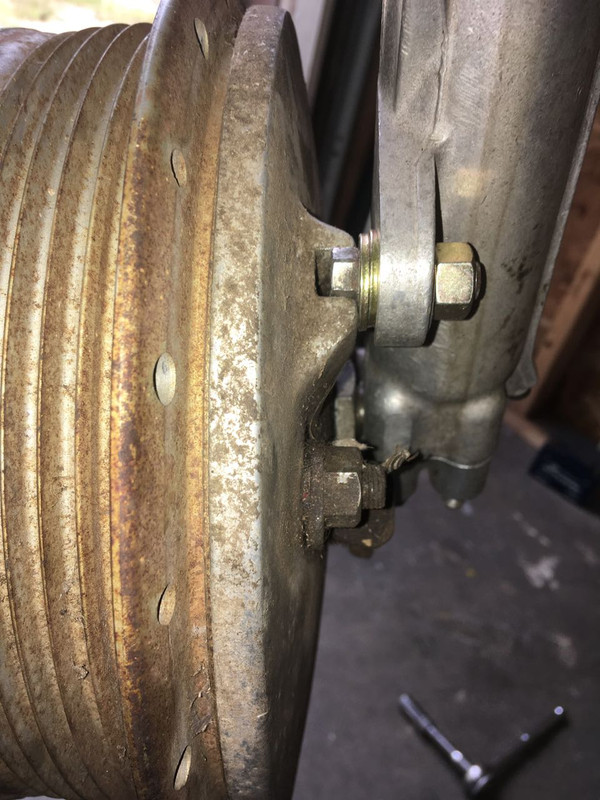 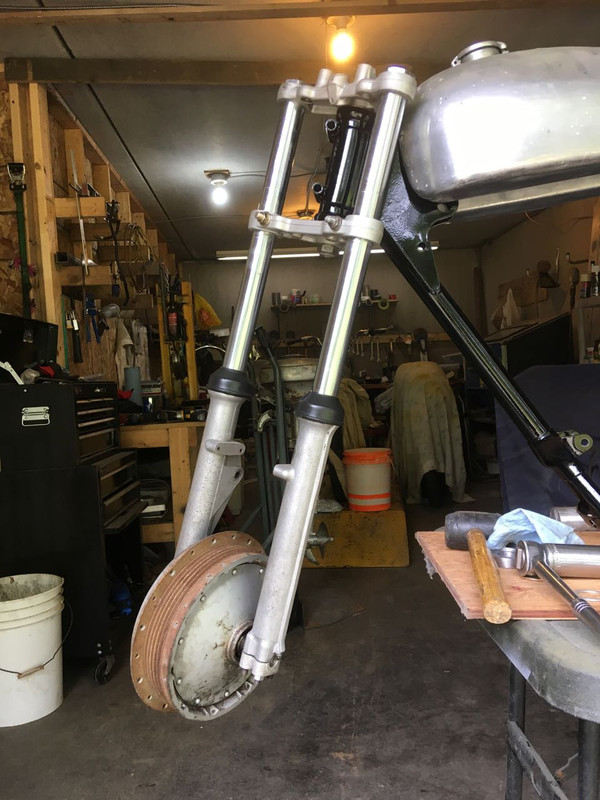 I decided to go with an old school black theme so painted the triple clamps and the sliders black to match the frame. Installed the motor as well. 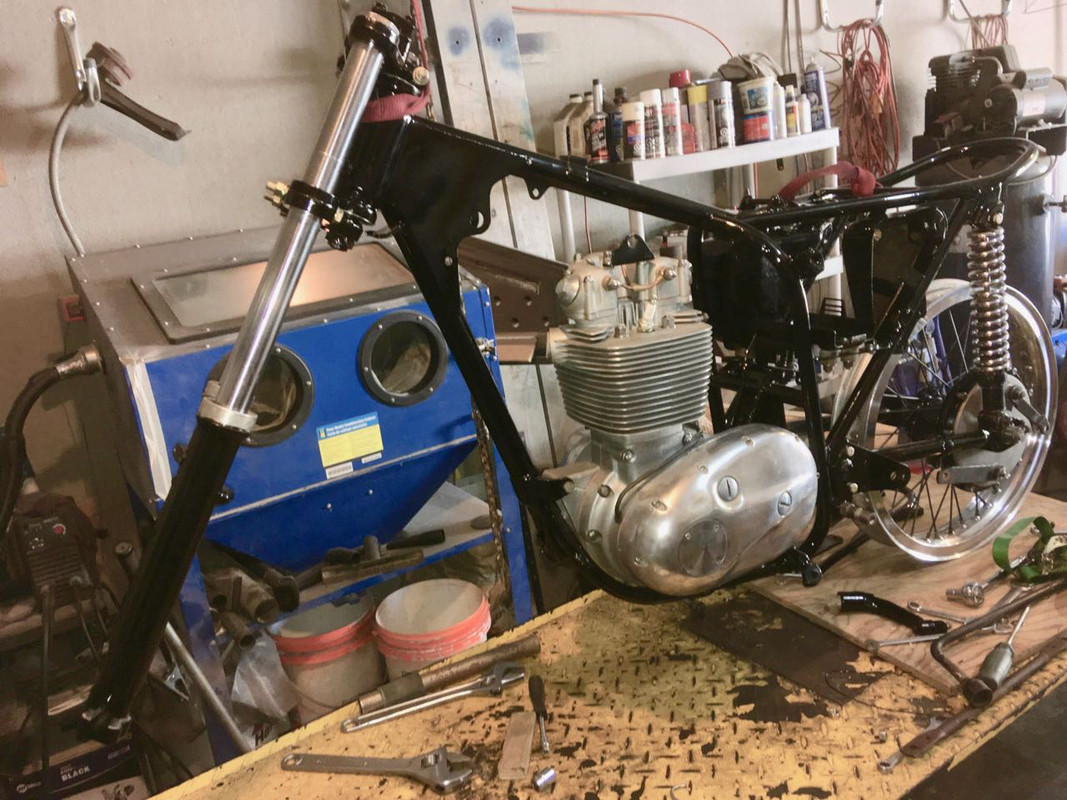 I also had a Weimer (sp?) front rim, probably from a BMW, which nicely spoked up the 8" BSA hub. 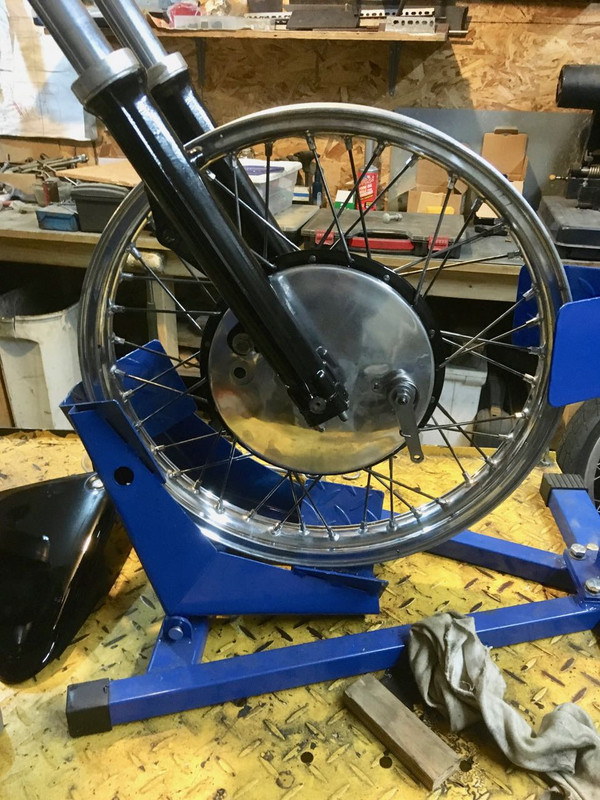 Which brings the project up to date: 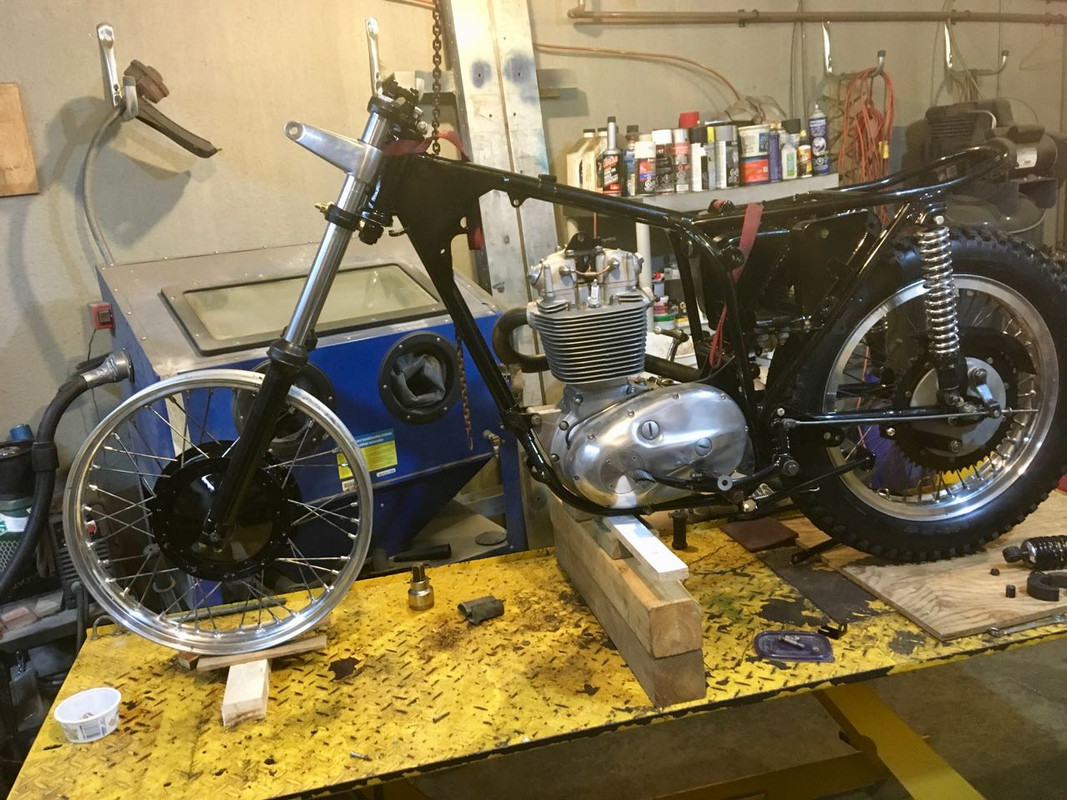 Some day I will probably try a OIF fork on my WD B40, so I'm watching and learning.
Top

I made my own adapters because I already had the bearings for the OIF frame. But BSA Unit Singles (see above) has the proper adapters with the bearings here:

They are SRM I believe, but I had thought they no longer made them.

Double posting due to internet problems.

We had some unusually warm weather for a couple of days so I sandblasted, sanded, "Bondo'd" a TRT25 OIF steel tank I had and painted it this morning with some paint leftover from the Bridgestone 350 project. Other than a few sags in the metalflake, it came out looking very good. I'm still trying to decide of a paint scheme. 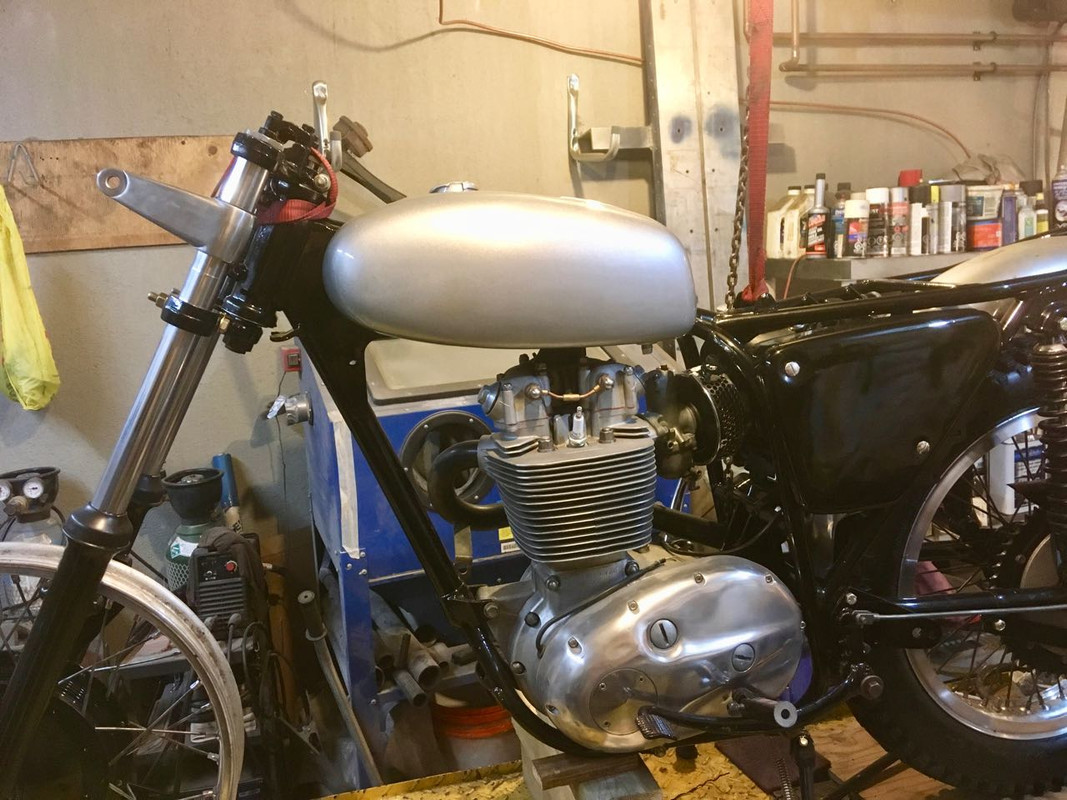 Meanwhile I'm thinking I'll splurge for a short trials type seat to get the look I want.

I got busy with the paint gun and added a bit of color. Just need to decide which BSA logo to use on the tank.

New seat is coming from England - - hope I don't have to wait for Brexit to get it! 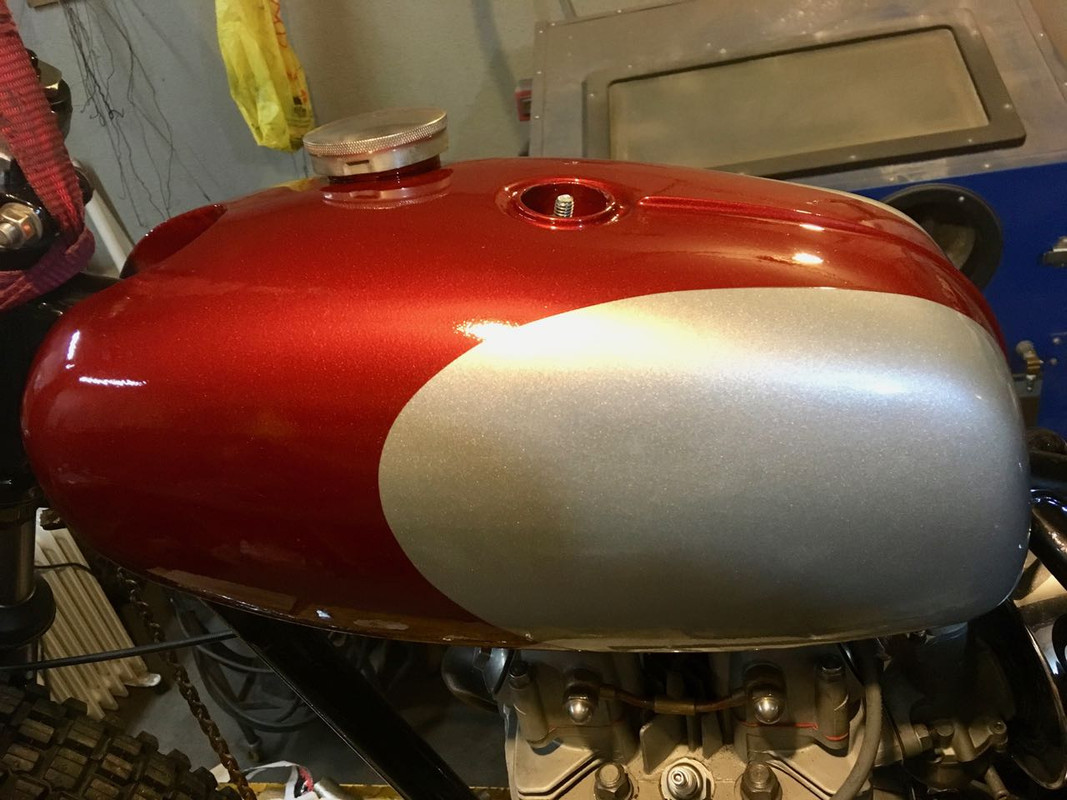 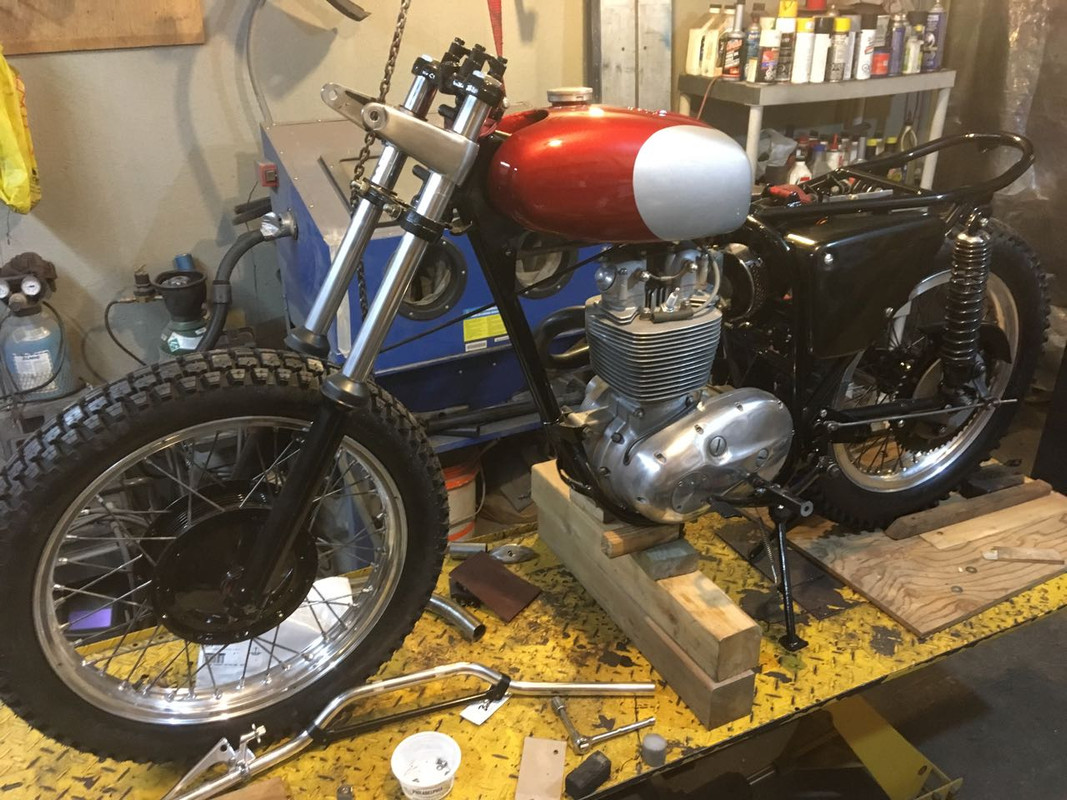 We'll do a great trade deal with Canada, Tom.

So they tell us anyway...

Well Ian, I'm pretty sure that Canada and the UK will always be good trading partners, but it seems that our leaders vs. that large country to our south may not see eye to eye!

In any case, I didn't have to wait for Brexit, as my new seat arrived a couple of days ago with a bill for $30 for tax and handling. I made a couple of brackets as well as modifying an exhaust of unknown origin to fit the B44. I'm not going to finish welding the exhaust until I can get a "peanut" muffler", but it looks promising.

B44 with seat, tank, and rear fender

I broke down and bought a new headlight bucket from British Cycle Supplies, and ordered an LED headlight from China (delivery to N.S. in less than 2 weeks). But, I had to rewire the bike negative ground to get it to work. No big deal as I had done all the wiring myself so just had to reverse the wires on the battery, the regulator/rectifier, and the Boyer ignition. I also added a relay for the horn to limit the current going thru the ignition.

Just need gas, oil, and a bit warmer weather (-10 degrees Celsius today). Then I have to go thru the steps to get it titled and registered. 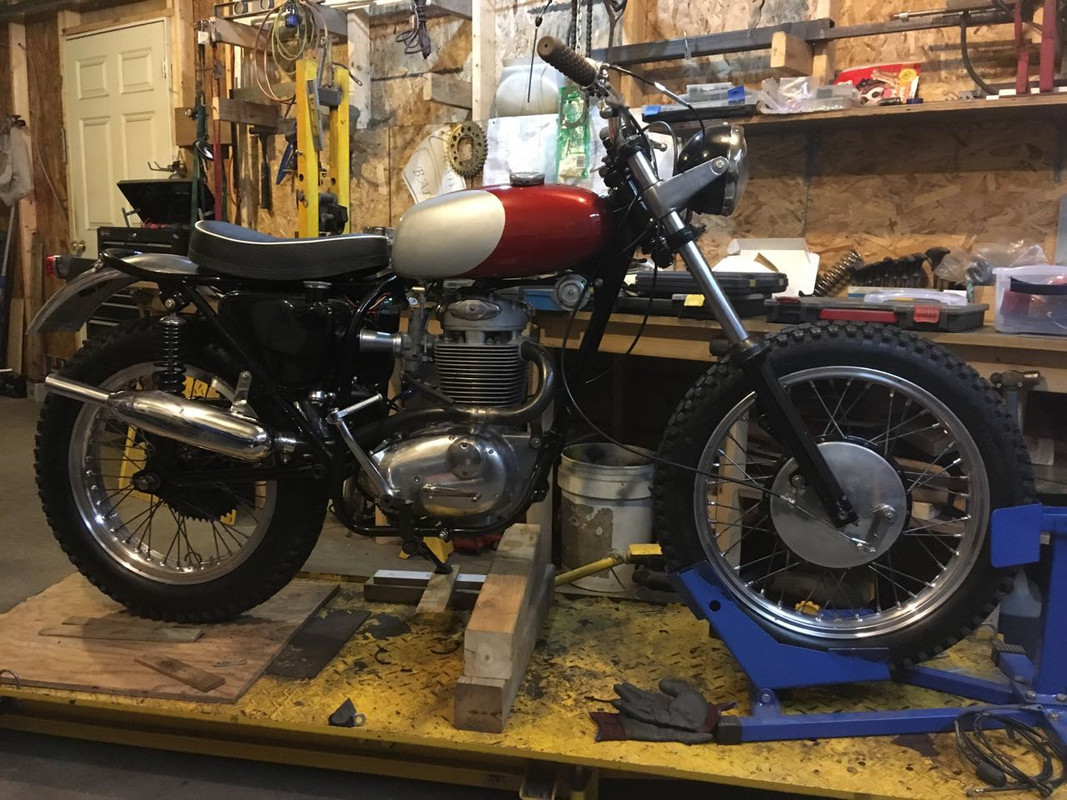 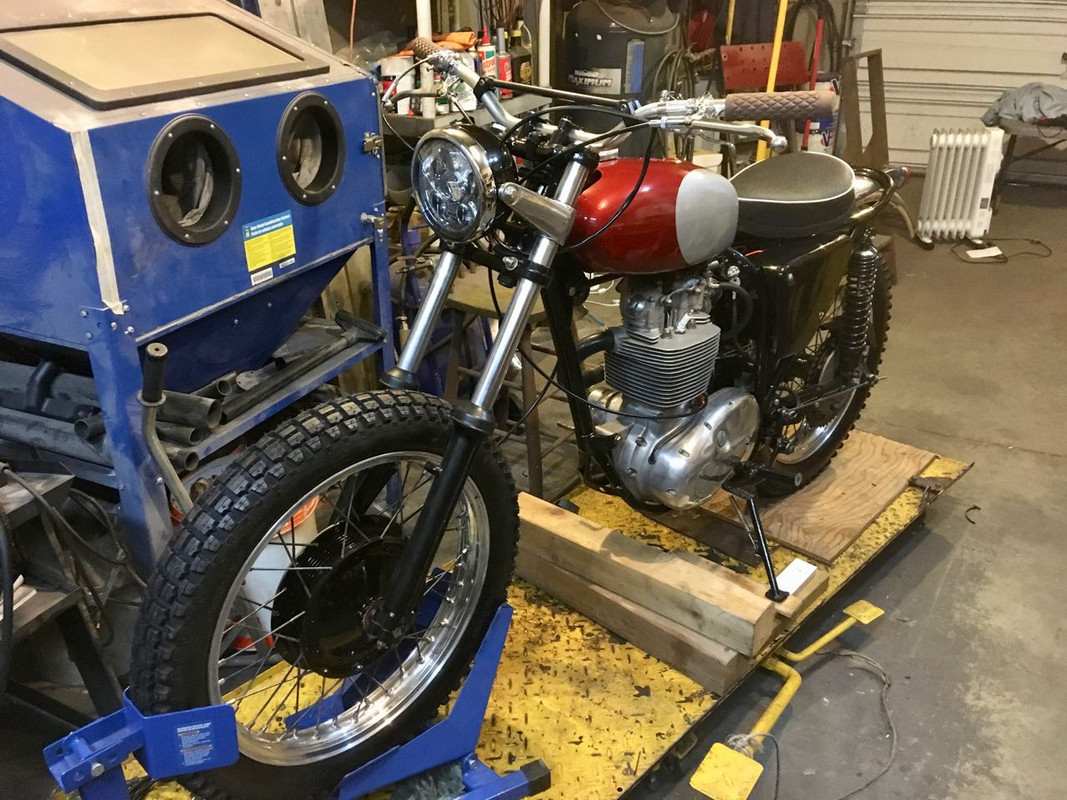 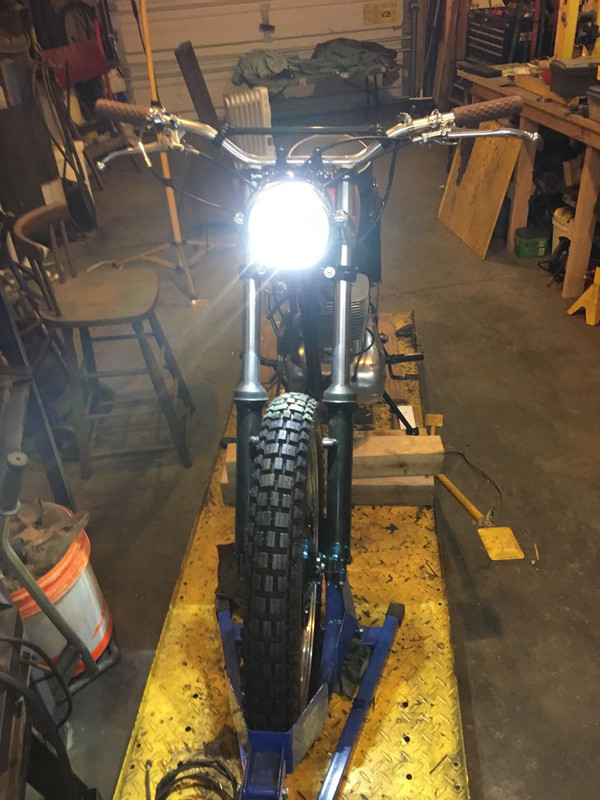 The bike's coming along nicely

. What's the plan for the front fender? The BSA / Triumph 3 hoop type would look good.

I hope the process to get the bike titled and registered is not too painful as I have heard it can be tricky for you guys across the pond.

I'm undecided on front fender. I have a high mount from a B25T which will fit and a chrome fender, but I'm not sure I want a chrome front fender with the aluminum rear. Is the 3 hoop one the same as B50 but with the extra vertical brace?

As for licensing, I've done it before. Just need bill of sale for the frame and motor, fill out several forms, photos, and invoices, submit to the Provincial DOT, and wait 6 months for the inspector to come down my way.
life's uncertain - go fast now
Top

I was thinking of the type shown below, but I guess if you've gone for oif forks there won't be a fixing point at the bottom near the spindle (axle):
.

Actually...there is...that is, when you fabricate one from a piece of aluminium 90 degree angle stock. It took me about 25 minutes back in 1977 to make both of them. Plus another 4 minutes to mount them. Granted I was using a rusty ragged hack saw and a dull drill bit. But, when one is 25 years old, the magic happens faster than when one is 68. And, in more ways than one, if you get my meaning and I think you do.
Top

I had this fender and mounting bracket up on a shelf waiting for somewhere to use it. It is actually a very nicely made K&L Industries. The fender is plastic, but with a new coat of silver paint and maybe a stripe, it would match the tank. Does it look too modern or out of place? 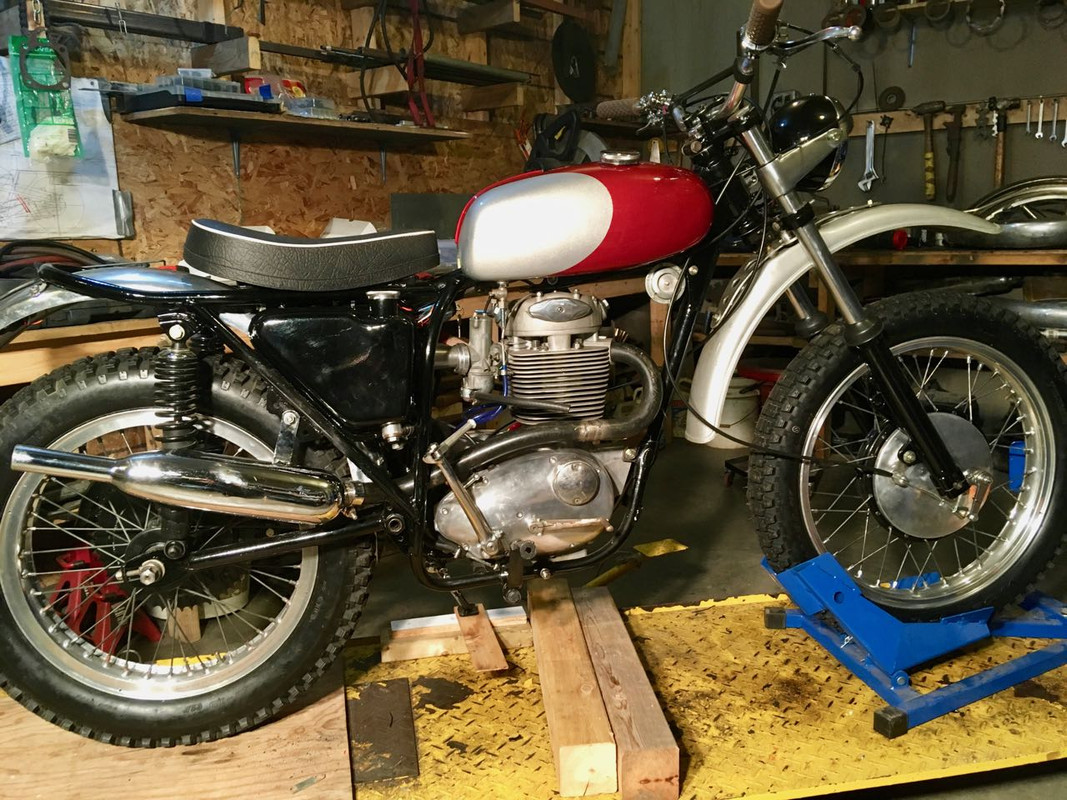 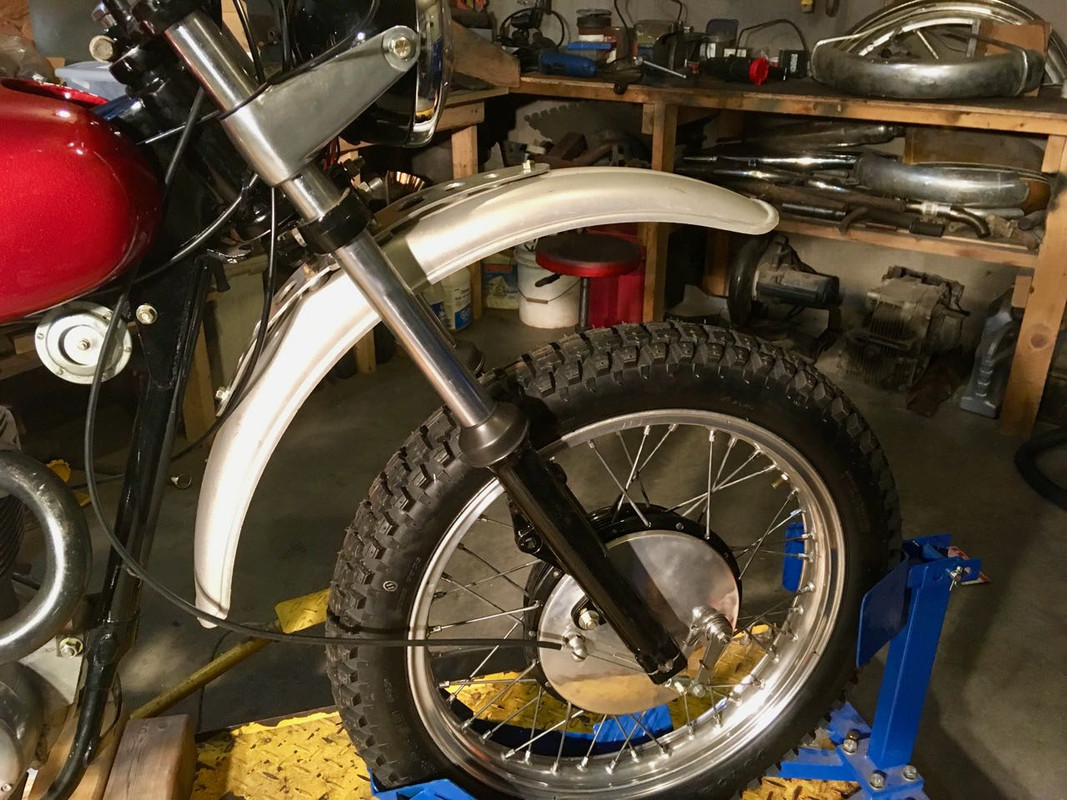 It fits the scheme of the bike as being cheap!
life's uncertain - go fast now
Top

fender color looks pretty close to tank. It would be cool to find a rear fender to match. The alloy rims look great too.
machines, materials and motorcycles.
Top

as the bike is for using it, - it looks good for me

( you need to change the fender when it gos to the national museum later... )

( you need to change the fender when it gos to the national museum later... )

LOL: It's your bike that will go to the national museum, Beat --- highest mileage BSA B50 in history! Not to mention electric start, re-engineered Mikuni carb, and DIY ignition system.

P.S. It is interesting how a completely original looking B44 will fetch more money than even the best custom built ones, as Mr. Mike can attest to.
life's uncertain - go fast now
Top