Whoops, I meant "speedometer" and I can't edit the topic! (Edit by mm: Your wish is my command)

On my recently completed B44 parts bike, I needed a speedometer. Besides the cost of a working Smith's speedo, there are the speedo gearbox and cable to worry about. I noticed a post on Britbike.com by Mark Z about his GPS speedometer which might be of interest here. And the GPS ones like this Ellinger one I purchased thru Amazon are only about a $100. They are intended to be mounted on a negative ground system, but all you have to do is attach the blue wire (which is ground on a negative ground system) to your hot wire and connect both the red and orange wires to ground. The red wire is for the tach; the orange is backlighting. You could put a switch on the orange if you want to be able to turn off the backlight feature, but it's not necessary as the light in the tach will now indicate that the ignition is tuned on.

From a post on the Britbike forum, Mark Z also bought a mounting bracket made for standard 3-3/8" "Auto Meter" gauges. You can get a simple clamp-on unit or a fully enclosed model. But as I was too cheap to buy one, I made a simple flat plate mount that attaches to the handlebar clamps, but could be mounted on the triple clamps. I'm using OIF triple clamps and couldn't easily make one that I thought would be sturdy enough when mounted to the original headlight bracket mounts.

The annoying thing is that these units come with an antenna lead that is 4.9m long, or 16 feet, and are not to be cut. I ended up with the sensor mounted just behind the seat with velcro, and running the wire forward around the headstock and back to the seat post three times before it actually reaches the instrument.

I've only ridden it about 10km. but it seems to work great. 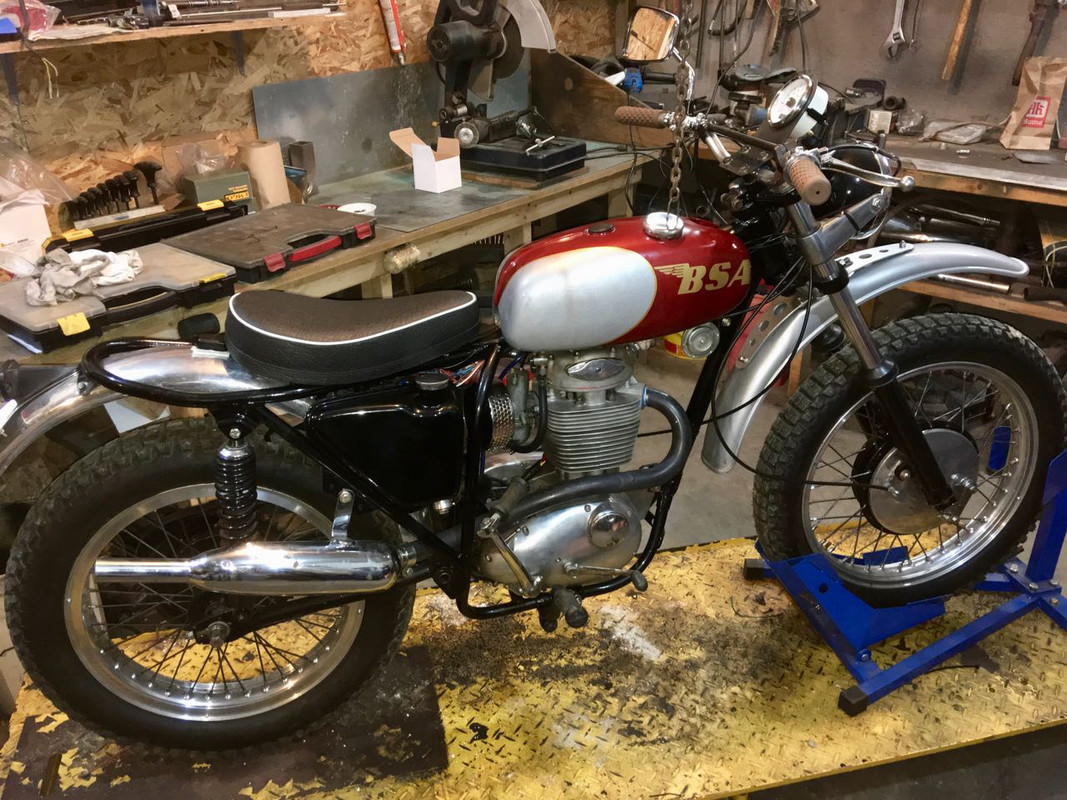 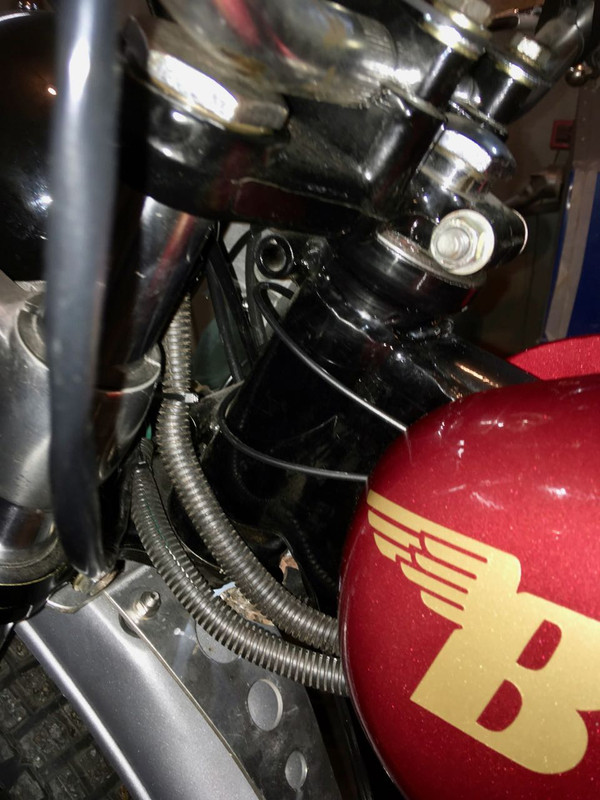 Antenna wires wrapped around the headstock 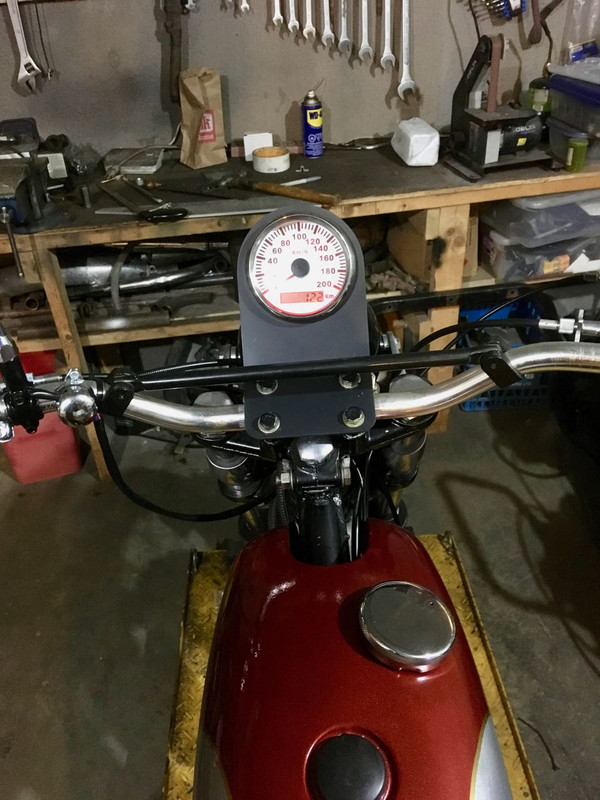 Mounting bracket made from .090" aluminum

Nice looking bike, I went with a motogadget m-unit to wire up everything, expensive but neat,

I really like the paint job on the tank, I normally prefer the BSA steel tank version to the Tr****h version you've used, but you've done such a great job with the paint curves that it works really well.
Top

.
Hi Tom
.
Can you provide any further update on the performance of the GPS speedo? Thinking of getting one for my latest project but concerned about how easily the signal is picked up as the antennae is meant to have 'clear view of sky'.
.
This is the one I'm thinking of getting with built in tacho:
.

I think that speedo uses a standard GPS antenna. I has something similar mounted on an old van I had, it eventually succumbed to water ingress. Knowing the size I would be tempted to try to hide it under the seat foam, so unless your arse is made of mu-metal it should perform quite well.
There is no evidence to support the notion that life is serious.
Abyssinian Wire-Haired Tripehounds Gnash.
Top

Steve, nice looking instrument, although from what I've just read in the instructions it would appear that the rev-counter functionality is for multi cylinder engines with 4 cylinders and above!
John
Top

I didn't see that, thanks for pointing it out.
Steve Sewell
Top

SteveS wrote: ↑
Wed Sep 23, 2020 6:16 pm
.
Hi Tom
.
Can you provide any further update on the performance of the GPS speedo? Thinking of getting one for my latest project but concerned about how easily the signal is picked up as the antennae is meant to have 'clear view of sky'.


I cannot provide any update because I have never been able to get the bike registered because the Dept of Motor Vehicles was shut down all summer. I applied for a title about a month ago, but I'm afraid my application got lost in the mail. By chance, I started it and rode it up my driveway and around a 3 acre field today. It wasn't working, but when I got back, I realized that the ignition wire from the battery had got disconnected. It kept running, even idling on the alternator alone. I even turned on the LED headlight and it came on but was flickering. Hooked up the wire from the battery and the speedo came back to life.

Here's a photo I took in June. 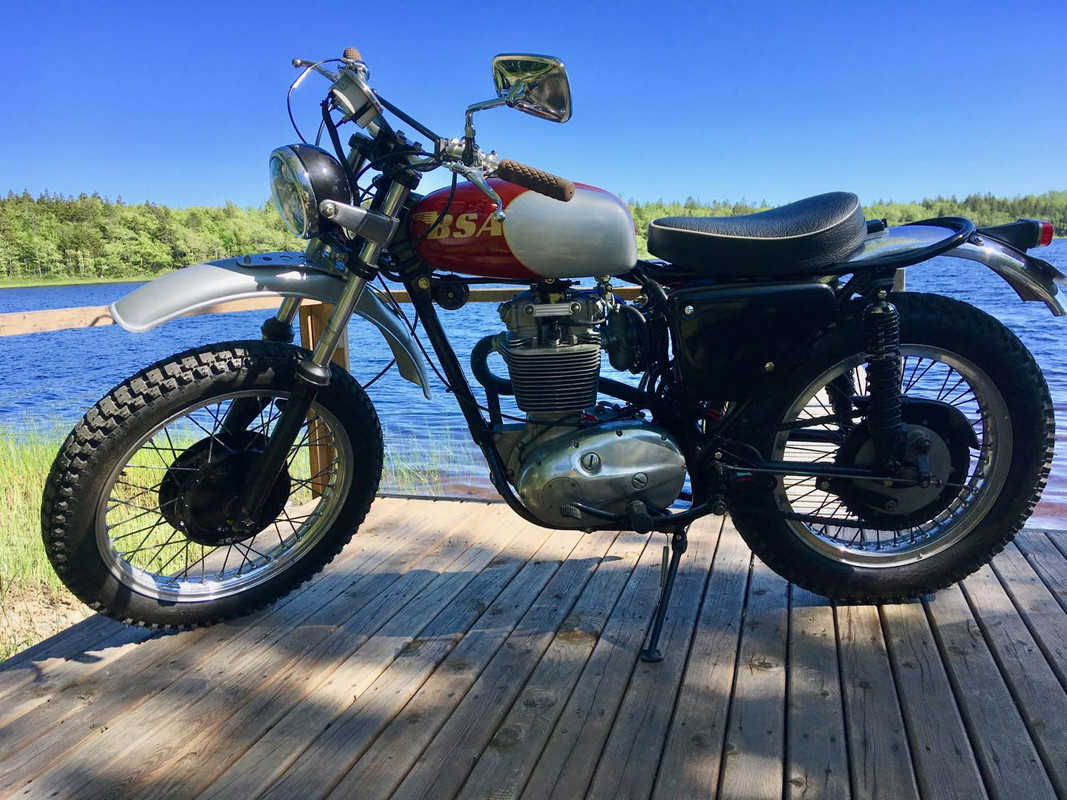 nice swimming pool you have....